On-demand mobility regardless of age, ability, or wealth. JPods combine the on-demand service of the Internet with the 400+ ton-mpg efficiency of freight rail to convert urban traffic costs into jobs and value. 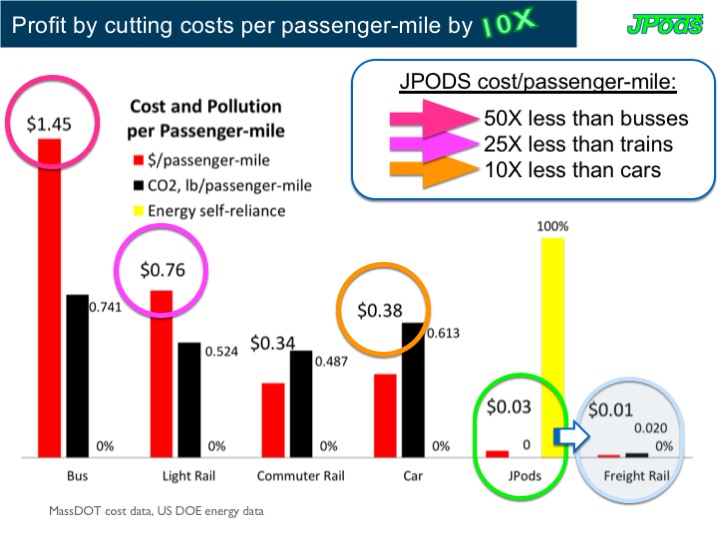 Half a Century of Self-driving cars

The problem is with regulations, not with technology. Self-driving cars have been providing radically greater safety for half a century:

JPods patent (6,810,817) improves on the Morgantown network in 2 important ways:

As documented in Congressional study "Automated Guideway Transit" the only barrier for "four to six decades" to transportation innovation is Federal regulations. Federal regulations resulted in a century of rotary telephones and the 25 mpg efficiency of the Model-T. Restoring communications to free markets in 1982 resulted in the millions of jobs digitizing mobility. Restoring  soon as free markets are restored to transportation

JPods vehicles, like the personal car, are designed to carry 1 to 6 people. This makes JPods infrastructure light and inexpensive. The small packet size means many more stations and trips that tailor the trip to the traveler. JPods small size allows many different pods tailored to many different uses. There are pods for passengers, cargo, water, etc....

Tesla, by violating every law that gets in Musk's way, has delivered 3 billion self-driving miles on roads with a 9-times better safety record. The Smart Summon promo video demonstrates driving a Tesla with no driving in the car at all. How many laws are violated by operating a vehicle without a licensed driver?